MDX statements are what SQL queries are to relational databases, but instead acting on OLAP (multidimensional) databases. In the case of TM1, we will use these expressions to query a dimension (hierarchy) and its members, cubes and their data points, etc. You will find out that a lot is possible if you get the syntax right.

Writing MDX statements will not be that easy, certainly not in the beginning. Where can you find help ? 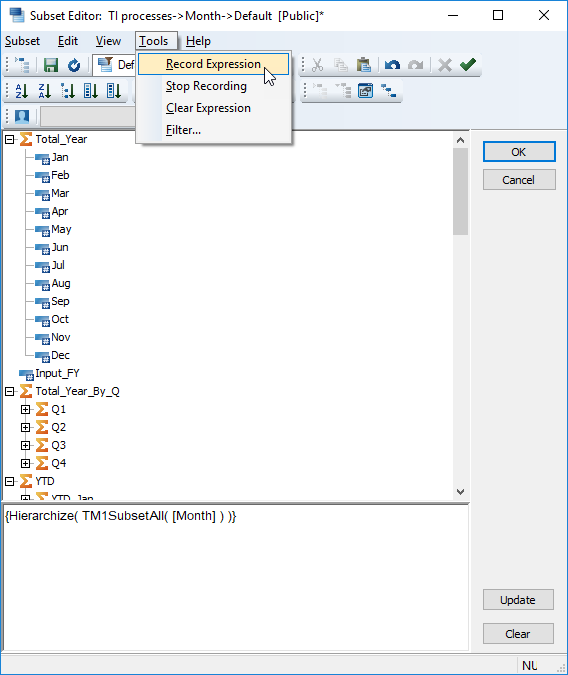 Record the relevant steps, much like the Macro recorder in MS Office applications - Visual Basic for Applications or VBA for short.

I already dropped the name, George Tonkin. A great number of discoveries were done by him and he shared them to me and the TM1 community via this page but also through the TM1 forum. He does a lot of effort to advance the collective knowledge on things like MDX and REST API in the TM1 community. This page would not nearly be the same without his contributions. Send him a big thank you and please make sure to share your own findings with George and myself. Countless hours (or weeks) went into collecting and testing the information below and I (we) appreciate any comment / remark / addition / error correction.

As a TM1 developer, we mainly use MDX statements in the following cases:

Mind the syntax, it is crucial to get that straight. If not, TM1 won‘t like it… Some of the statements can be generated in the Subset Editor: turn on the Properties Window (menu View), then choose Tools > Record Expression. Record the expression while you do the steps manually. Stop recording when you are finished.

the following high-level tips should be taken into account:

Below, I will present you the MDX statements I need most of the time. This page will therefore serve as a kind of code library: we can copy/paste and adjust only names of cubes/dimensions/elements. You will notice [] around dimension names and element names. They could be left out, unless (for instance) the name contains a space. Then we must enclose the name with []. The expressions are most of the time case-insensitive. Except for function names, the expressions are also space-insensitive.

Using an existing subset in an expression

Here we retrieve a number of months, based on the contents of a public subset called subset1 (its first element). That element and the next 5 elements are taken, 6 months in total. Note that this technique is very powerful in continuous time dimensions, crossing years. Your 12 month moving windows becomes child's play !

Finally on this topic, consider "jumping" to a different month by advancing 5 months: 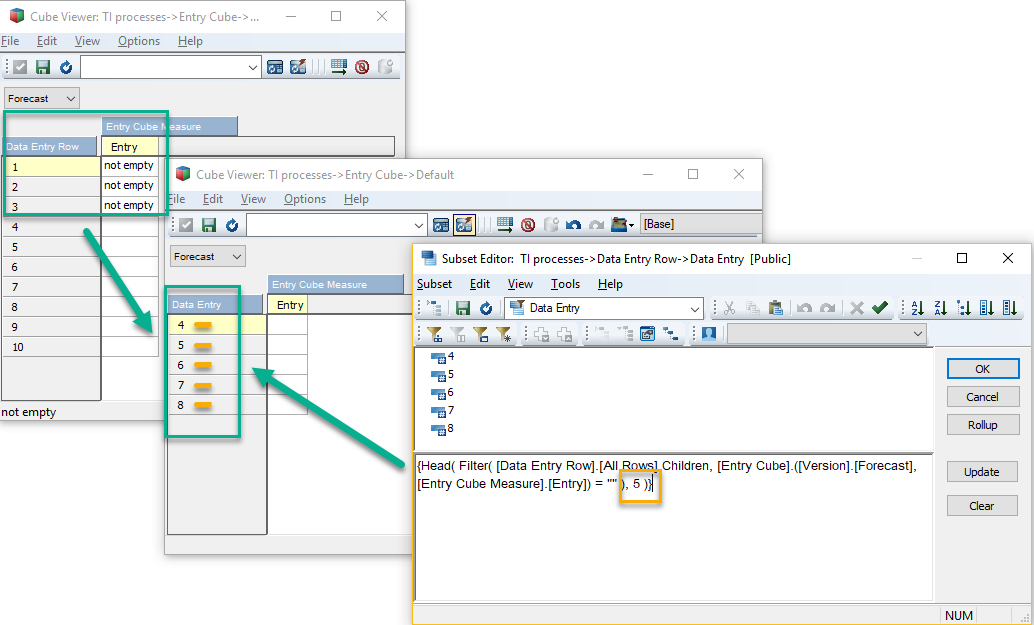 To convert text in a cube to valid elements, we typically use: TM1FilterByPattern, StrToMember or LookUpCube. We will show examples of the syntax below.

Subsets based on other objects


TM1 stores the output in the }ClientProperties cube in a measure called "STATUS"
5 is the number of seconds at which the list of active users is refreshed.
To disable it, use 0 or leave out the property.

When you look at the Microsoft links I mentioned above, you will find a lot more functions. Including functions for information on the dimension structure: FirstSibling, Parent, Children, FirstChild / LastChild, Ancestors, and so on. Many other options for creating dynamic subsets are explained on that webpage. It is a must read!

Needless to say, but these subset definitions using MDX syntax can be used in the function SubsetCreatebyMDX. That function can also create temporary subsets as of TM1 10.2.2 FP4 (see here).

The function TM1ELLIST in a Planning Analytics For Excel spreadsheet can return an array of elements from a hierarchy. Interesting twist is that the list can be driven by an MDX. This opens many doors that were previously hard to open. The workaround of having a dynamic report (active form) was not elegant. Nor the workaround of having to array-enter the SUBNM formula in "enough" cells, knowing that it would need the MDX dynamic subset be part of the hierarchy. A fully dynamic MDX in a spreadsheet to drive a selection… nada ! Now we can.

You can just enter in a cell like A1:
=TM1ELLIST("CXMD:}Clients",,,,,"Head( TM1SubsetAll( [}Clients] ), 10 )")
and the result will spill down in the cell and 9 cells below - unless you have less than 10 users in the model. No need for array-entering the formula with Ctrl-Shift-Enter to receive the curly braces left and right of the formula. You now enter the world of dynamic arrays in Excel.

For those using VBA to generate the formula, consider:

The result are Year elements in column A, and the same elements prefixed with a "Y" in the corresponding cells in column B.

Lists in Planning Analytics For Excel provide similar functionality. They could provide a good alternative for dynamic reports in case you just want to return hierarchy members with some attributes or security information.

The IS keyword can be used as well. If you remember the dynamic subsets we created to filter elements by levels, named appropriately in the }HierarchyProperties control cube, this can be written with IS as well:
Filter( TM1SubsetAll( [Period_MDX] ), [Period_MDX].CurrentMember.Level IS Semester )

In case the name of the level is a reserved keyword or there happens to be a dimension with the same name, you should fully qualify the name:
Filter( TM1SubsetAll( [Period_MDX] ), [Period_MDX].CurrentMember.Level IS [Period_MDX].[Year] )

Another secret found by George Tonkin.

A few caveats apply. If you create a dynamic subset in TI (the function is called SubsetCreatebyMDX('NAME OF THE SUBSET', 'MDX EXPRESSION'), make sure you always have at least 1 element that matches. If not, the process errors out. Unless you use TM1 10.1 or later, where an undocumented 3rd parameter to the function equal to the dimension name, will avoid the error in case no elements satisfy the expression. As an alternative, in that case you should loop over the dimension elements and insert the matching elements in a static subset SubsetCreate('DIMENSION NAME', 'SUBSET NAME') and SubsetElementInsert('DIMENSION NAME', 'SUBSET NAME', 'ELEMENT NAME', POSITION). The latter technique will always work (unless you are stuck in an endless loop like me on some Monday mornings), whichever you will use depends on your liking and coding skills.

In Excel spreadsheets, we can work with MDX queries to return a subset: for example in active forms. There, you could store the MDX query in a (hidden) cell. The query expression could be chopped up to include cell references. For instance, the user can choose a Product family in cell H10, and the active form returns the data on the lowest-level children of that Product family. Mind that there could be a 256 characters limit for the MDX expression for older versions of TM1. You COULD leave out the dimension names BUT then the element names must be unique throughout the ENTIRE TM1 model (over all dimensions).

One of the many nice emails I received over the years !