As you know or might not know, I live in Belgium. It is that nice, tiny country in Western Europe that is known for beer, chocolate, mussels, waffles, Brussels sprouts, and so on. And also for non-food things, by the way. In general, the upper part of the country speaks Dutch while the Southern part speaks French. In the East, a geographically small area consists of people speaking German. Hence, by and large, Belgians speak their languages, including English. Also, being so small, a major part of the Belgian Gross Domestic Product consists of import and export: the companies often do trade with companies abroad, hence the need for the inhabitants to (at least) understand English. Many international companies have subsidiaries or headquarters in Brussels: a lot of nationalities gather.

Why am I telling this and what is the link to TM1? In TM1 we can set the language of the user interface. Below, I will present a chart containing the possible choices. 1 user might prefer French while the colleagues are using English, in 1 TM1 application. For this to work, set the Language parameter in the TM1p.ini file to the desired language. Very important: please make sure that TM1 clients like Perspectives and Architect are fully closed when setting the value. If the Language parameter is not present in the ini file, you can add the line to the file. It does not matter where you add it. You can find the ini file in the folder %AppData%\Applix\TM1. 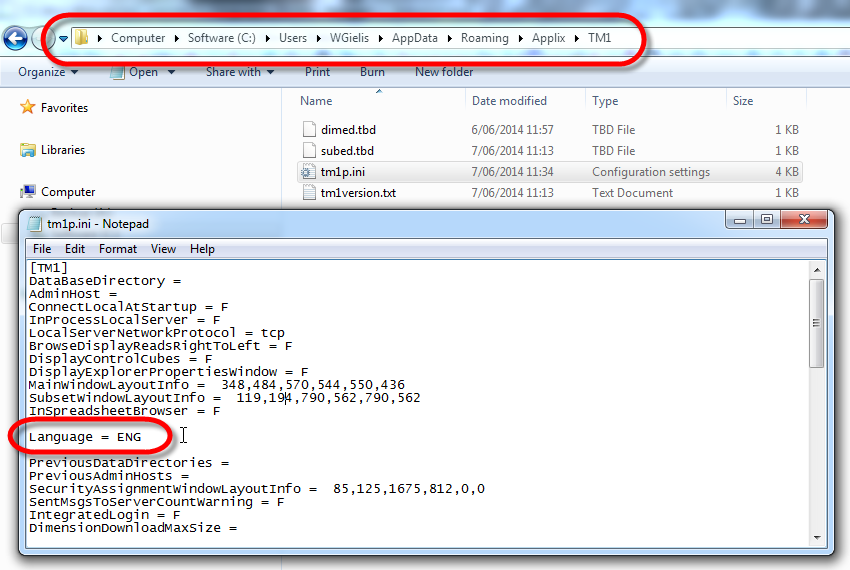 This configuration file can also be found in 2 other locations, the ProgramData folder or the bin folder of the installation. You might also want to check for a different user, in case you still don't find the file. And if you don't find the file, you can recreate it. Close all TM1 related clients and open up Architect or Perspectives. Change a setting in TM1, for example the Admin host. Confirm your choice. At that time, TM1 will create the file. It is NOT sufficient to just change the visibility of cubes or dimensions in the View menu to force the creation of the user configuration file.

Next to English, other languages are supported in the user interface. What follows is a chart containing parameter value, language name and 3 other useful terms:

If you choose a language that does not exist, English is the default.

There are a number of other languages with special characters that my computer does not seem to like very much :-) The characters are unlike those we normally use in our alphabet, or way too incomprehensible to me, and therefore I leave them out of the chart. I marked the 6 languages above. Please find out yourself what are the localized names.

The 'Why' of this page

Why do I write this down? There are a number of reasons. For example, if you have a Default view on a cube, languages other than English will not recognize it. Of course, the same holds true for Default subsets in dimensions.

The second reason has to do with Turbo Integrator processes. A process that uses the subset 'All' (set in the user interface of the Data source) on a given dimension, will work fine with English as the language. For a French user, for example, TI will translate the subset to 'Tout' (see above in the list) and it will work… fine. Using the function DATASOURCEDIMENSIONSUBSET = 'Tout'; in the Prolog tab, will work fine. But if we do the same exercise for a user with Italian language set, DATASOURCEDIMENSIONSUBSET = 'Tutto'; will refuse to work! However, for the Italian settings, it works if you use DATASOURCEDIMENSIONSUBSET = 'All'; or 'Alle' or 'Tout' (and possibly also the localized names for Japanese and Simplified Chinese - untested). In sum, without extensive testing, if you use the names for English or one of the other languages above the empty row in the chart, you are safe. Irrespective of the language of the user. Please let me know if you have remarks or when you spot errors.

See this page by IBM.