In TM1 we regularly write logic for business rules and business processes. The editors we have (Rules Editor and Turbo Integrator) are not modern user interfaces. They have not been changed since ages (except maybe the "Advanced Rules Editor" but also that was not the best piece of software). Yes, there is Performance Modeler. But still we tend to prefer Architect and coding the old-fashioned way. In conjunction with a text editor like Notepad++ this seems to be the most efficient for TM1 Developers and Admin persons.

Below I will show you what I use the most in Notepad++ to help my daily work in TM1. 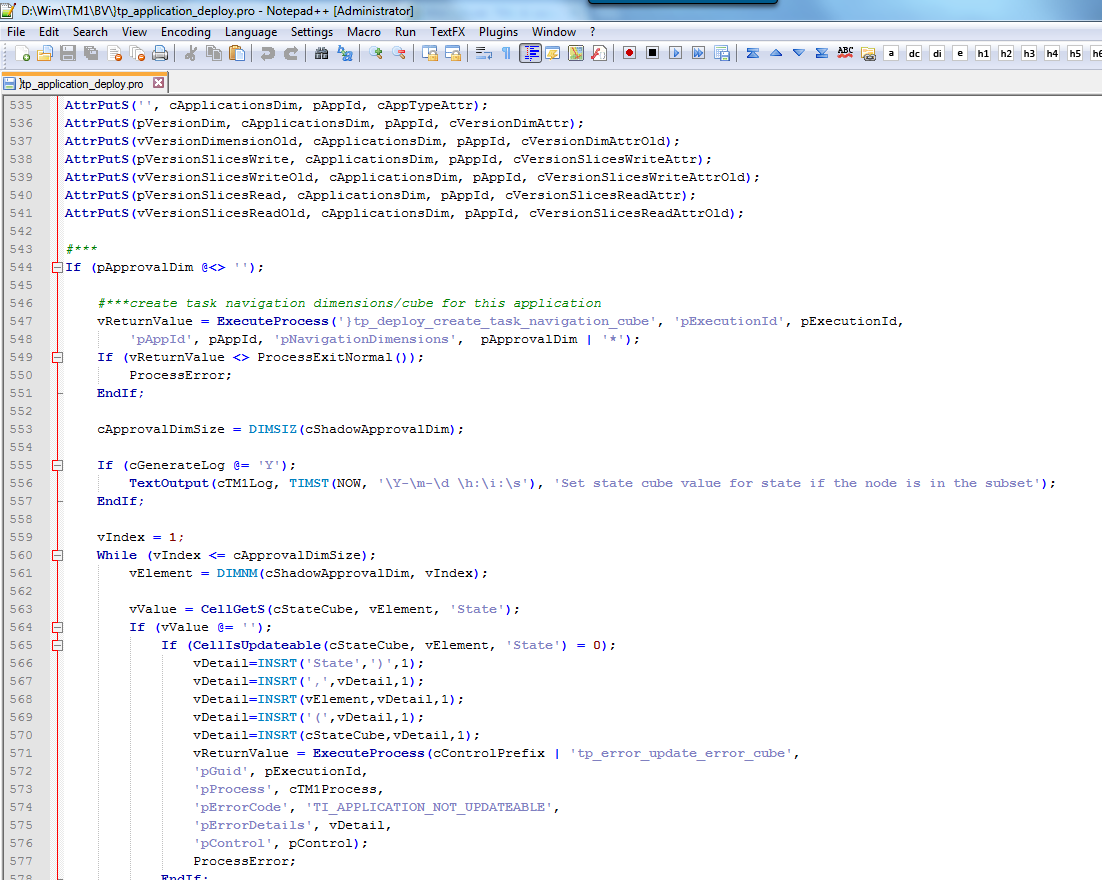 The menu option Edit > Blank Operations allows to convert tabs to spaces and to do similar operations.

You can find a certain text string in all *.pro or *.rux files of a folder. Regular expression searching is supported.

In its multi-tab interface, you are able to clone a window or move a window to another view in the same Notepad++ window. Comparing files and code becomes a breeze. Talking about comparing code, you will want to use the plugin "Compare". With 2 files opened, hitting Alt-D instantly compares the 2 files.

Another useful plugin is "Save as admin", whereby you can save files that would otherwise not be possible without elevated rights.

Rectangular (columnar) selections are possible. This means that you can delete a "column" in a *.txt text file, for example. Or add a string to 20 similar rules statements in one go. For a rectangular selection keep Alt pressed, and make the selection.

You can also set in the Notepad++ settings that creating a selection with Ctrl-click functionality, allows you to take action on any of the selected areas. For example, you copy a piece of text, Ctrl-click 10 different areas, paste, and the 10 areas will be updated all at once !

Frequently used words can be completed automatically like a kind of Intellisense. This saves time when using TI statements like DimensionElementInsert or DimensionElementComponentAdd. Do note that this autocompletion feature can be case-sensitive.

Coloring function names and other codes is a helpful when developing code. See: this link on the TM1forum. You can extend the XML file if you want. One of the small additions is that files with extension *.pro or *.rux can be opened up in Notepad++ automatically with the TM1 language turned on.

Lines of code can be hidden, folded/unfolded, and several levels in the same document can be defined. Next to that, you can copy code as html to the clipboard, giving you coloured lines of code that are easier to read and understand.

It is possible to save a set of files (like 5 processes or some rux files) and reopen that session later on again. I use it to have a session with a tm1s.cfg file, tm1p.ini file, the tm1s-log.properties file and a couple of other useful text files. This saves time, definitely.

Notepad++ has its own macro recorder but I did not do a lot with it yet. Likewise, it is possible to have projects in Notepad++, each with their own files, and they can be managed from within Notepad++. Again, that is something to explore and see how useful and timesaving it is.