If you are like me, you probably also tend to update TI processes in a text editor like Notepad++, rather than the clients that the old TI editor. Whenever we are in development stages of a new model or a bunch of TI processes, it's just easier and faster. You would open up the *.pro file in Notepad++ or similar, make code edits and save the file. HOWEVER, there are 2 main caveats:

For example, here's a small part from a Bedrock TI process opened in Notepad++: 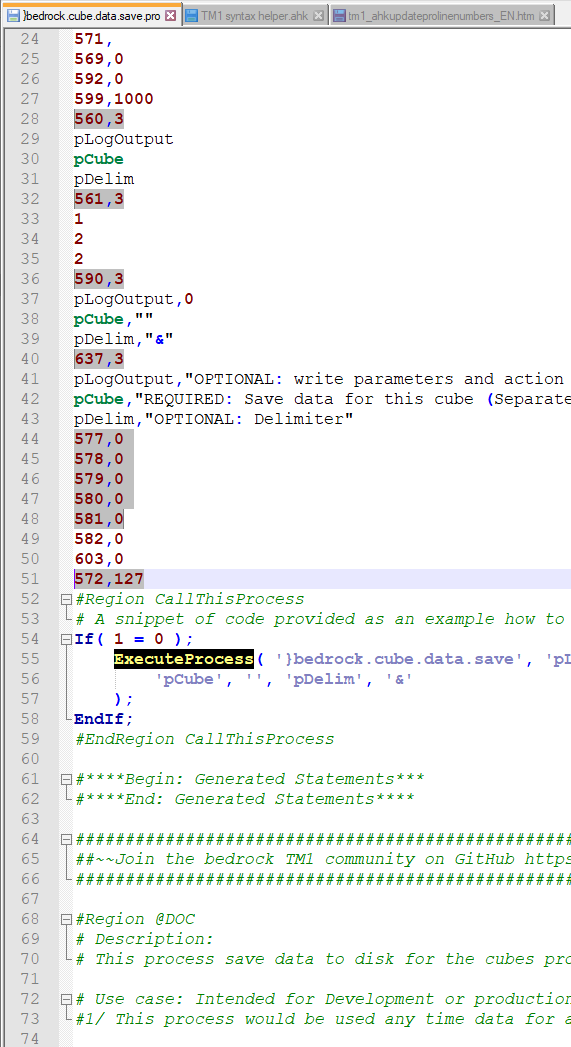 The selected lines all have a code (3 digits), followed by a comma, followed by the number of lines of information/code that follows. The information that follows pertains to the area of the process marked by the ID. For instance: 560,3 means that the process has 3 parameters and the parameter names. 637,3 marks the 3 prompts, 1 for each parameter. 577 until 581 deal with variables in the TI process, in this case there aren't any such variables. 572-573-574-575 are very important too: they will contain the number of lines of code in the Prolog tab, Metadata tab, Data tab, Epilog tab, respectively. Hence, whenever we change a line of code in a TI process and it means that we have more or less lines in either tab, we need to update the line number count. If not, or if the number that follows the comma is wrong, we risk losing code ! Be cautious there.

As I've been bitten myself a number of times, and just because it's such a stupid and error-prone task to do manually, I decided to automate it with AutoHotKey. It's not terribly difficult and, luckily for you, I will share my code below. Here it is.

What does this code do ?

It's worthwile to note that I have Notepad++ in English. If you use a different language for the interface, then the names for the menus that we used in the code could be different. See the code of WinMenuSelectItem. You should update this part accordingly.

Obviously, I still need to give you the code for my 2 custom functions. It's a lot less code compared to what you have already investigated above: