This page is the continuation of the first part, where we looked at overlapping date ranges. I introduced a practical case, namely, showing graphically the periods of June and July where:

In the second part of the article, I will mainly do 3 things:

The formula in cell P4 is as follows:

This isn't quite the easiest Excel formula that you will see today… First off, I need to tell you about that date_ component in the formula. This is in fact a formula defined with Formulas > Name Manager: 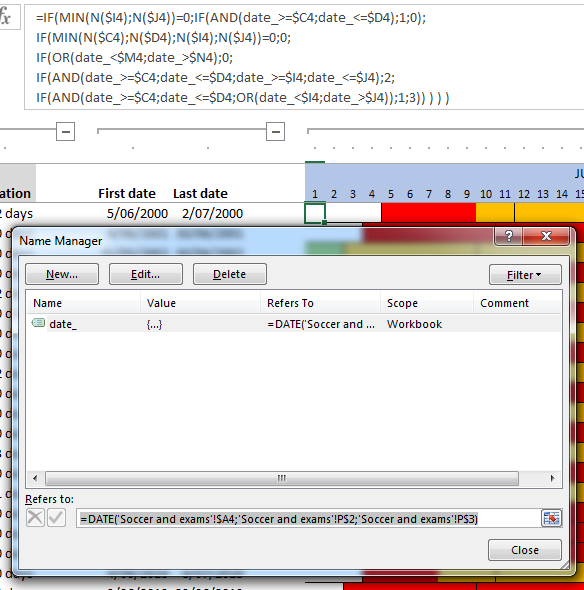 'Soccer and exams' is the sheet name, as you can see when you download the example file on top of the page. If you position the cursor in cell P4, you can use that formula to set up a "dynamic" date: it's always the date with year in column A (same row), the month always in row 3 (same column) and the day number always in row 3 (same column). The big advantage is that you can now use date_ in your cells, without typing that DATE function and its 3 input arguments over and over again, but also keep the formula shorter and easier to follow. You can use date_ in any cell of your spreadsheet, it will always refer to a year, month and day combination on the specified absolute and relative reference cells.

Going back to the formula in cell P4. In fact, all of the days in June and July (columns P to BX) for all years use the same formula because I use relative cell references. The formula returns 4 possible outcomes:

The conditional formatting (CF) to color the cells, will use the result of the formula to know how to color the cell. We will discuss the CF shortly. First, I would like to show you a nice trick that can help you greatly when setting up the file. During setup, you will want to toggle between showing the numbers (0, 1, 2, 3) and hiding these numbers. Using CF I let you do this. Cell P27 contains a dropdown where you can choose the state; showing numbers or hiding them. The CF will look at that cell, and format the cell values such that the values disappear if you choose "Hide numbers". If you choose "Show numbers" the CF rule will do nothing and the default "General" numberformatting will remain active: 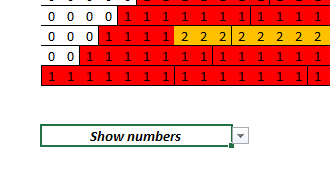 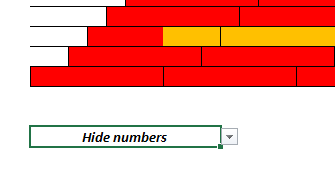 The N function converts the contents of a cell to a number. If the cell already contains a number, that's fine, the result is that number. If the cell contains text, the text will be converted to the number 0. Since columns I and J can contain text (a question mark) instead of dates (which are numbers in Excel), the N function can be used to always compare the input in a numeric way and to forget about the question mark. Reading the formula, we say:

Now it is time to have a look at the CF. All CF rules apply to all 61 days (30 days for June, 31 days for July). Because I cannot resize the screen for the CF rules manager, here are the rules in 2 screenshots: 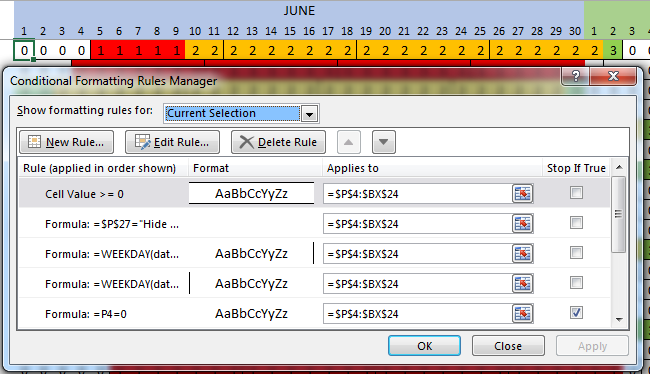 So, there you go, conditional formatting for highlighting overlapping date periods, indicating weeks as well. Hope you learnt something new with these 2 articles!