About nautical miles, gigabytes and centimeters

Who of knows the Excel formula =CONVERT( ) ? This function allows us, effortlessly, to convert different units to other units. For example:

Do you feel much younger, sweating and cursing in school for geometry ? ;-) 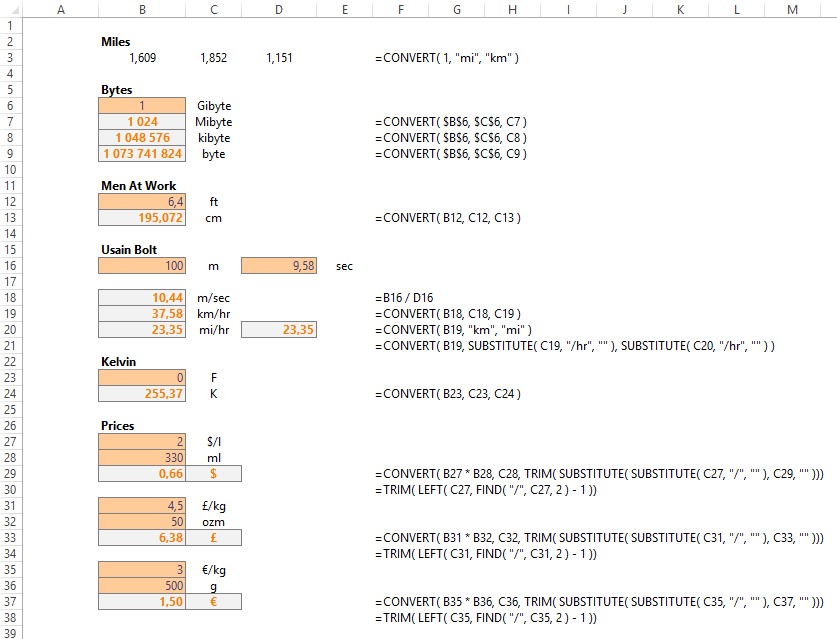 The function =CONVERT( ) requires 3 arguments, in the following sequence:

Grams are denoted with the symbol g, meter is m, mile is mi, nautical miles is Nmi. There are lots of other units that can be used. I could call them the base units, all because there are still a lot more possibilities. We can combine the base units with powers of 10. Then "cm" stands for centimer, "kg" stands for kilogram, etc. Possibilities (large to small):

Yotta denotes a factor 10^24, yocto is the extreme value on the other end with a factor 10^-24. Scientists will love these symbols to avoid computations with lots of 0s.

We can see giga in the table (symbol G). byte is also another unit with which we can make conversions. Consequently, we can compute the number of bytes in 1 gigabyte as follows:

Please note that the units are case sensitive. To convert 1 nautical mile to 1 mile, you do:

and the next formula gives an error message because "nautical miles" and "mebi" are incompatible:

Did you know that, out of the 10 fastest men and 10 fastest women on earth on the 100 meter sprint, 18 originate from either the US, either Jamaica ? Impressive !

The workbook above also contains my conversions for prices. As the formulas are rather generic, please have a detailed look at them. You can easily change $ to €, $/l can also become £/ozm (pond per ons/ounce), etc. If you respect the measurement units within a certain system (weight and mass should not be combined with volume or time for example), a lot is possible !